Carrying debt may feel like trying to lug a heavy suitcase up a ceaseless column of stairs. While it may seem that your own struggle with debt is unbearable, there are people out there who have it worse than you. For these folks, their battle against debt resembles the effort a strongman puts forth to pull a truck!

We’re not at all trying to undermine your financial problems. But the individuals we’re about to discuss in this article were at one time stuck in a financial black hole, perhaps, one much deeper and darker than your own. However, they worked their way out. Their stories prove that anyone, including yourself, can manage and eliminate debt. 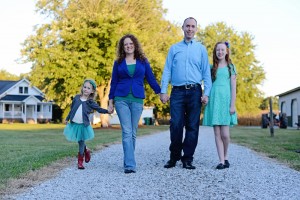 Imagine learning that you’re $127,000 in the red. That was the case for Cherie Lowe and her husband, who are based out of Greenwood, Indiana.

Determined to crush that staggering tower of debt, they decided to use the snowball method – a highly touted strategy for reducing debt. Along the way, they made some changes and sacrifices.

They took on extra work, especially Bryan, who would go on to hold three jobs. They started running their home like a business, streamlining their spending habits so they wouldn’t buy anything that would cut into their savings.

Their efforts grew even more intensive. The couple stopped buying meat to avail themselves of more funds, and Brian completely dropped the habit of eating at restaurants and buying coffee (the latter, for which he didn’t enjoy for 2.5 years). For Christmas, they didn’t exchange gifts between themselves although they bought toys for their kids.

How did their efforts turn out? Cherie and her husband were able to completely pay off their $127,000 debt load in just four years.

Speaking of the experience, Cherie described it as a unifying venture, saying “We’re on the same page with our goals, saving 15% of all of our income for retirement, quickly building college funds for our daughters (ages 6 & 11), and saving for fun things like vacations, a more elaborate Christmas, and a new car.”

Lessons to Manage Your Debt from the Lowes Earlier this year, the average Canadian household carried a consumer debt total of about $21, 028 (excluding mortgages). Now multiply that by five, and you still come a bit short of the debt that Travis and Vonnie Pizel carried. With credit cards alone, they owed $109,000!

Although they earn a combined income in the six-figure range, they accumulated much debt over the span of a decade. It began with Travis acquiring multiple credit cards and credit lines. At their darkest times, Travis recalls hiding the debt from his wife, and losing sleep over how he’d keep the family in good financial standing.

The couple acknowledged they needed help. They sought the assistance of a debt management company who not only helped them reduce their interest rates, but also to create a 57-month payment plan. It was nothing short of intensive, but committing to it would change their lives for better.

First, they had to pay $2,489 monthly for 55 months. Additionally, they had to follow a few mantras. Their debt advisors reminded them of the need to question everything. They had to look at their current expenses and cut them if they weren’t essential. Among these “disposables” was their landline phone, cable TV subscription, and fancy dinners at restaurants.

Travis and Vonnie also avoided taking their usual weekend trips, got rid of their backyard hot tub, and had to put their school fundraiser practices on hold. They also embraced DIY culture for tasks involving home repair and hair styling.

Finally, they informed their children about their financial situation and some of the sacrifices they’d have to make. Doing so made it easier for the couple to make changes. More importantly, it helped them teach their kids valuable lessons about managing money.

Travis’ words of advice are as follows: “The most important thing I’ve learned during this process is that being a provider for my family doesn’t just mean buying everything they want. The root of our financial problems was the simple error in judgment of saying ‘No’ with failing as a husband and as a provider. A true provider does what is best for the long-term success.”

Lessons to Manage Your Debt from the Pizels

The debt totals that the two couples listed above held are extreme cases. Your reaction to their stories may have been one of shock, but you most likely felt a jolt of optimism after reading about their success.

Even if you don’t carry as much debt as the Lowes or Pizels, there are several lessons you can learn from them. These couples were able to reduce their insurmountable debts by making personal sacrifices, committing to reduction plans and following the advice of credit counsellors. If they were able to consolidate their debts, you can do it as well. It just takes some patience and perseverance.