Be Wary of Selling Your Car Online

Yesterday, The Huffington Post reported that U.S.-based internet vehicle sales company, Canadian Auto Market, is currently embroiled in controversy after several of its clients accused the company of cheating them out of their hard-earned dollars.

The Alberta Motor Vehicle Industry Council (AMVIC) has since launched a full investigation into the matter, upon discovering that the company is in violation of the Fair Trading Act for selling cars without a license.

Be Careful Who You Buy From

While Canadian Auto Market is not listed in Alberta, its website features listings from around the province, which is a direct contradiction of Alberta’s code of business morals and ethics. Speaking to the Post, one cheated customer, Lahcen Amzoug, described his experience trying to sell his car through the shoddy online auto market, saying that a salesman guaranteed that his 2008 Mazda 3 would be sold at a higher price than he initially hoped.

After paying the company $576, Amzoug was informed the car would be sold within weeks – six months later, and he had yet to receive a single offer. “This is a pure scam. I paid money and I didn’t receive the service,” he said.

Other stories labeling the company a sham have poured out from disgruntled customers who also tried using the service. Eventually, the Better Business Bureau of Central and Northern Alberta confirmed they were receiving several complaints about the company, and gave them a “F” rating.

According to Amzoug, after posting his Mazda on Kijiji for $12,500, a senior manager with Canadian Auto Market located him, “guaranteeing” that his car would sell for $1,000 more if he sold it via Canadian Auto Market. The manager added that they had “several buyers lined up” for his vehicle. Pleased with the offer, Amzoug agreed, and signed an electronic contract.

After three months, however, the manager’s tone went from “we have several buyers lined up” to “it’s a difficult car to sell.”  Angered, Amzoug eventually went back to Kijiji and sold the car on his own, for free.

In the interim, Amzoug went to Go Public to share his story, in a bid to ensure that other customers wouldn’t get “scammed” by Canadian Auto Market. After Go Public contacted the company with questions about his case, they claimed they were “making a rock into a mountain” and threatened to sue Amzoug for defamation, stating they had credited him a full refund.

Amzoug, however, denies this claim. “To be honest with you, at this point I don’t even think that I could get my money back from these guys, but I don’t want this to happen to other people,” he said to the Post. “I just wanted to get the word out so other people won’t be scammed as well.”

Selling Your Car Online? Do Your Due Diligence!

Canadian Auto Market, which cites “superior customer service” as their “number one priority,” claims they are licensed to sell vehicles in British Columbia, but not in Alberta – however, authorities have stated that the company does not hold a license in either municipality.

“If they truly are in the automotive business, they need to be licensed with us and trained so the consumer has some protection,” explained executive director of AMVIC John Bachinski.

AMVIC’s investigation into the allegedly fraudulent company is ongoing. But in the meanwhile, the moral of the story here is to do your due diligence.

As we’ve previously mentioned, being thorough is possibly the most important detail in purchasing a vehicle, selling a vehicle and/or taking out an auto loan. Before you settle on a car dealership, bank, or auto loan specialist like Auto Loan Solutions, you must make sure you do your research first! We honestly can’t stress this enough, especially if you have poor credit.

If you do, there are several ways to re-establish your credit, none of which include sending money to fraudulent auto market companies. Usually the first step is taking out a loan, and proving to lenders that you can pay back your loan efficiently and on time.

According to a new study by AutoTrader, 50% of millenials – anyone born after 1980 – today buy their vehicles online, many of the times without even seeing the vehicle in person first!. It’s a strange new world out there.

In Canada, this trend has also rose to prominence. As such, many companies such as Canadian Auto Market have come out of the woodwork, looking for vulnerable, gullible and impressionable internet dwellers, whether you’re looking to sell your car, buy a new car, or take out an auto loan. There are also untrustworthy buyers out there trolling the web, looking for ways to take advantage of inexperienced sellers.

Protect Yourself From Scams By Following These Tips:

1. Never do anything until the cheque clears. If someone has expressed interested in purchasing your vehicle, always assume the worst until you’re guaranteed that you will get paid, in full, for what you’re selling.

2. Meet in Person. The best way to avoid fraud is to meet the potential buyer/seller in the flesh.

4. Don’t send money to ANYONE – unless you’ve verified the person is trustworthy, the vehicle you’re buying indeed exists, and that all the info you’ve been provided with is 100% accurate.

5. Scammers often tout their esteemed rankings on eBay or Yahoo Auctions – if they insist on a method payment, don’t buy into it. Money should only be sent through a platform you feel safe and secure with.

6. Don’t reveal that you’re on to them. If you’ve found a scammer selling, or buying, cars online, better to report them to the proper authorities.

Also, make sure to avoid anyone dressed like this: 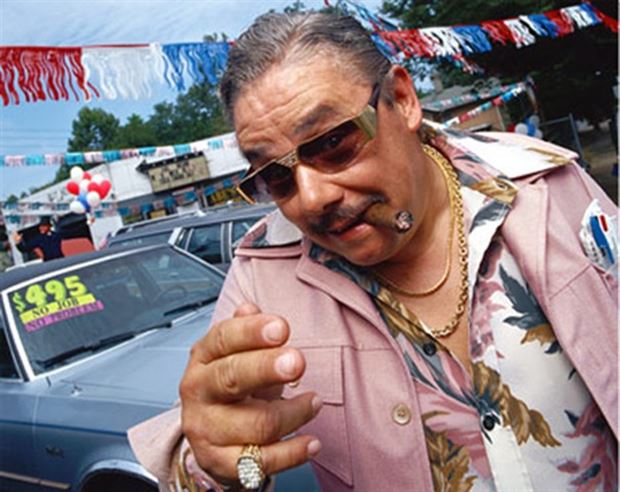 If you follow our advice, and do your research before selling, or buying, your car online, you should be able to steer clear of scam artists, fraudsters and other such vermin that unfortunately exist on the web. Looking for more tips? Like our Facebook page! Our community members are constantly posting tips on financial advise, finding low interest rates, etc.