How to Survive the Drive Through Rough Summer Weather

When a severe storm hits your city, assuming you’re at home, it is usually not a big deal. Sure, the power 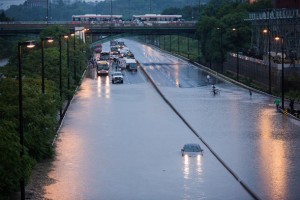 could go out for a while, depriving you of Netflix and fully-microwaved popcorn. If you appreciate nature, though, you’ll just sit back and watch the lightning show. However, it’s a different story when you’re driving through it. In fact, it can be quite dangerous, and you might run into trouble if you’re not prepared for the highway weather conditions affecting your route. That’s why it’s important for you to recognize summertime hazards such as severe weather, and learn how to stay safe no matter what the skies are cooking. Doing so can prevent a weather-related accident.

The Many Faces of Severe Summer Weather

You’re most likely familiar with severe weather in the summer, because you’ve seen it and even felt it. Dark clouds hover over the horizon, while a cool, calm breeze rustles the grass and trees. And for some of you, there are headaches and bodily pains (due to barometric changes). But there are various forms of bad weather that not only make driving a hassle, but also dangerous.

Hurricanes and tornadoes should fit that list, but it’s unlikely you would actively drive during these extreme conditions (storm chasers not included). If you were to get such warnings, the smart thing would be to leave town, or run and hide in the basement!

Let’s say you run into bad weather. Murphy’s Law is in effect – you’re driving on a route you’re unfamiliar with and running late. You know you can’t drive the same way you would on a cloudless day, and at the same time, you’re panicking a bit. All of this is normal. But you can get over the nerves and arrive at your destination without any troubles if you’re doing the right thing.

Use all necessary safety features

Switch your safety features on when bad weather strikes.

Safety features alone won’t help. You also need to put your defensive driving techniques to use.

Pull over if necessary

If conditions get really bad, you will have to pull over. It usually won’t be for too long.

The Calm Before the Storm

Going off the last point in the previous section, you should take your car in for some serious TLC. Give your vehicle the servicing it needs, so that it takes good care of you when poor weather strikes. Visiting a licensed mechanic is always the best move to make. The last thing you want is to drive into a storm, blinded and ill-prepared to the conditions around you.

Shield Yourself from Nature this Summer

Unless you’ve got the powers of a Greek God, you can’t stop nature and the fury it unleashes. However, you can take steps to remain safe when extreme summer weather takes place. It’s all about preparation. First of all, you need to ensure that your car is in working order. You will be a heck of a lot safer on the road if all your car’s safety features are functional. Additionally, it’s important that you learn how to respond if highway weather conditions make a sudden turn for the worst. Finally, if you’re about to head out but hear about approaching storms that could turn ugly, stay home! There’s no need to throw yourself or your passengers in harm’s way.