Why the Modern World Has a Financial Literacy Problem

Imagine the brightest kid in class, who could someday land a six-figure job at a bank, ending up broke by the time he’s just 30. It’s a bleak vision for a young individual with so much potential, but for many, such a future looms on their horizon.

Financial illiteracy is a global pandemic. Young, old, men, women, blue collar workers and even white collar professionals, rush through life in a feverish and frenetic pace, neglecting the signs of their poor financial health.

If you feel that you too may have this financial “flu”, it’s not something to feel surprised about, neither is it worth the self-torment. It’s just a reality for the majority of people today.

Grading the World’s Knowledge About Finance

Apparently, the human race has a disorderly relationship with money. Take for example a recent quiz and its results published in The Atlantic regarding the topic of money management, and our lack of financial skills. The questions are as follows:

The article pointed out Russia’s high failure rate as a reflection of the nation’s post-communist climate, but also refocused its lens on capitalist countries and their inexcusably poor results.

Even the countries with somewhat stable economies and financial insight (such as Germany and Switzerland), house citizens that don’t share the same knowledge as those in “high places” (more on this later).

Of course, this is just one quiz, and other surveys dive deeper into the subject, uncovering a mixture of varying results.

For example, the results of a survey published in a Bloomberg Magazine article revealed that financial literacy varies depending on context. And in some cases, the findings look positive. 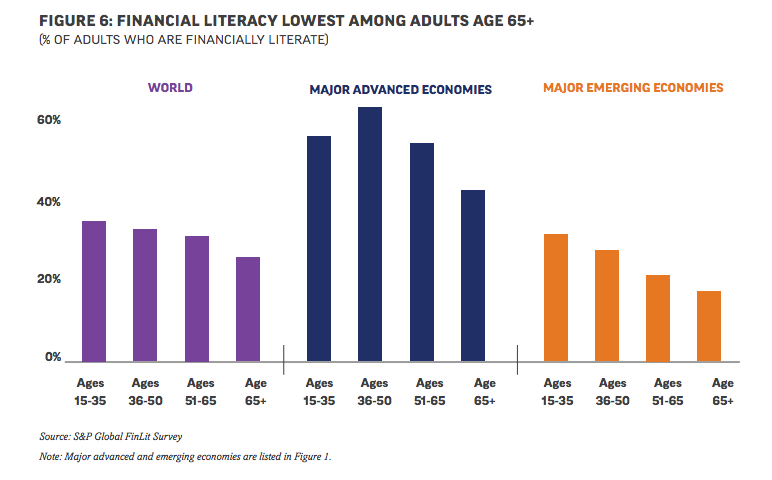 The graph above shows that financial literacy in developing countries ranks highest among young people (in this case, people age 35 and under). This could stem from the new generation’s ability to learn anything, including finance, online.

Yet still, you can look at this data, and see that regardless of age, the financial literacy rate, worldwide, is far too low.

How does Canada fit into the picture? Well, we’re neither terrible nor excellent when it comes to our financial literacy, meaning that as a whole, we can improve. Take a look at the questions below:

Consider our performance in the above-mentioned financial literacy test, for example:

The results aren’t too startling. Canada is a hive where people from various backgrounds co-exist. But for a country that touts the label of “developed nation”, too many of its inhabitants lurk in the dark when it comes to managing their money.

There is a push to get all Canadians on par with each other in terms of financial know-how. Right now, more than 50 initiatives aimed at approving financial literacy in Canada are kicking off, most of which will focus on debt management and detecting fraud.

Laurie Campbell, Chief executive of Credit Canada Debt Solutions stated, “We see people every day making a good income, but frustrated that they can’t make ends meet.” It is her hope hope, along with others that these initiatives will help reverse this growing trend.

Unfortunately, the timing at which the target audiences of these campaigns will receive this needed advice is much too late.

A Lack of Financial Literacy

The seeds of our money woes often get planted well before we leave the school system. It’s the reason why cycles of good and bad habits with money tend to repeat themselves, and why children often “inherit” the spending and saving behaviours of their parents. That truth highlights a major reason why financial illiteracy is so prevalent.

A Lack of Good Role Models

To find a good role model in life is stressful. But for those looking for a mentor who’ll teach them the intricacies of finance, the search is exhausting.

An often overlooked aspect of finance is the competition. As vain as it seems, people want to standout when it comes to status and wealth, and will keep the tricks to prosperity hidden.

And then you have those who want to give good advice, but don’t have any advice worth giving. They can range from parents who themselves struggle with money, to self-proclaimed gurus whose success was the result of luck, not logic.

A Lack of Financial Education

Remember sitting in finance class back in junior high, learning about credit scores and the bureaus who viewed them such as Equifax? Well, you didn’t fall asleep in it, neither did you skip it – you probably just never had a finance class.

Like millions of other youths out there, you may have left school with a brain full of historical dates and quadratic functions, but no knowledge on how to establish and maintain good credit.

As a result, you entered the real world without a true grip on how to manage money, but rather, just an abstract understanding of how not to use it.

It’s like pushing a herd of livestock out from a stable with no one to guide them – they got lost. Even worse, they appear as targets for “wolves”, unethical lenders who lure them in with unrealistic promises, and then devour their finances. 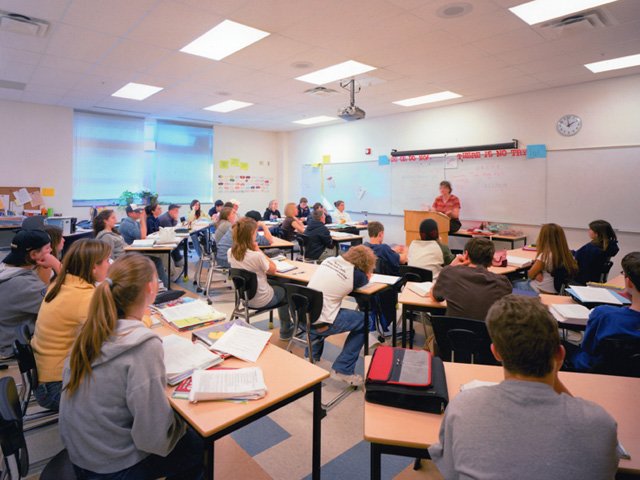 A Lack of Impulse Control

You know how some people blurt whatever comes to mind, never giving thought to the backlash of their hurtful or inappropriate speech? Well, those individuals likely have what’s known as poor impulse control.

Whether it’s a symptom of a disorder or just bad manners, psychology journals identify poor impulse control as the inability to resist urges or temptations that could harm oneself or others.

And such behaviour is commonplace among today’s shoppers. The need to own the sleekest phone, the urge to buy the fanciest home and the desire to wear the flashiest clothing are the reasons why so many people develop habits that push them in the red.

Materialism alone isn’t the reason why today’s world lacks financial knowledge. However, it is a distraction, one that takes our minds away from the matter of how we should handle money, so that we splurge it instead.

So this financial flu that we speak of, is it preventable or curable? Well, simply put, the answer is yes. Just as you can teach someone to read and write well, you can give people helpful instruction on how to manage their money effectively.

If you’re a person who struggles to handle their finances, there are many sources you can turn to for guidance.

For starters, you can approach a financial planner who has insight into the best finance practices, as well as your own circumstances. You can think of them as being a doctor, so-to-speak, considering how they look at the goals, the challenges, and the opportunities before you to suggest a plan of action for you to take.

If you’re dealing with serious credit issues, then you may want to consider working with a credit counsellor who can devise strategies to slowly lift you out of the red.

Regardless of whom you consult, just make sure that they have the qualifications and experience needed to teach you. Financial literacy isn’t a subject to take for granted.

Stay tuned for upcoming series of posts on how to attain financial literacy and rebuild your credit.