Why Geography Matters When You’re Shopping for a Car

Not all roads are built the same. In a literal sense, you’ve got concrete roads, asphalt roads, gravel roads and brick roads. And each one of them can affect your car in different ways. However, the focus of this post is not so much on the material used to build roads, but rather how the driving conditions of the geographical region in which you live affects your daily drive, and how that may spill over into the car you buy. You might reason that it’s not a big deal, but that mentality may cost you. Buying the right type of car for the area you live in is a wise investment. But how will you know which one is the best choice?

Driving Through Your Neighbourhood

When referring to the kinds of environments that people live in, there are generally three types: Urban, suburban and rural. The majority of human beings can be labelled as residents in one of these kinds of developments, although there is also the exurban (extra urban) category. These towns often fall into the category of being commuter towns.

Urban areas are unmistakable. Think of your sprawling city centres, lined with skyscrapers, crisscrossing highways and 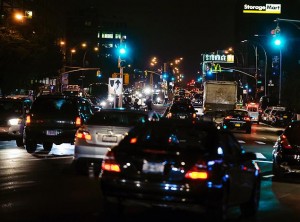 overpasses, and worst of all, traffic jams. If you live in an apartment overlooking a busy intersection, or a townhouse unit that’s literally smack in front of a streetcar system, you more than likely live in an urban area. Smaller, more compact vehicles are the most suitable if you happen to live in a dense and crowded city. After all, it’s no fun driving a big old box through narrow streets and tight parking spaces. Also, you want a car that’s agile, so that you can maneuver yourself around road obstacles, parked cars and cyclists or taxi drivers who forget the road isn’t theirs alone.

Ideal vehicles for the city

Do you live in a neighbourhood that’s spacious, perhaps filled with three or four bedroom houses? Is it on the outskirts of where all the tall buildings and major highways are? Is it quieter, greener, cleaner? If so, then you’re most likely living in a suburban neighbourhood. The beauty of suburban driving is space and less clutter. Apart from the occasional construction project, getting around in the suburbs is quick and easy. The streets are broader, the parking spaces are accessible, and public transit may be more sparse, making larger vehicles such as luxury sedans, vans and pickup trucks a good idea for homeowners.

Ideal vehicles for the suburbs

We can’t forget about those of you who live away from all the “action”. What does the world look like when you step out? If it’s a wide expanse of grass and forests, or livestock and barns, then you’re definitely a resident in a rural region. You’re probably under a lot less stress too! With that said, rural roads tend to be harsher than urban and suburban roads, often due to more rugged terrain or unpaved surfaces. That’s why it’s a good idea to consider a vehicle that’s built for such conditions, rather than just performance or style alone. SUVs and pickup trucks are good ideas for country. However, some performance vehicles such as muscle cars (and even some compact cars) work well for rural areas since you can actually push their performance on roads that are spacious and less crowded.

The other aspect of the topic that you need to think about is the type of terrain on which you drive. This is important for those of you who plan to drive abroad, whether that’s for a vacation or if you plan on moving permanently. For example, you can have two cities with the same type of roads, but offer a completely different driving experience just by means of where they’re located – one city may sit on flatland, while the other is sprawled out over a mountain. Driving along mountainous terrain can be simultaneously frightening and thrilling at the same time. Cruising through winding roads and bends, overlooking breathtaking views, can make you feel vulnerable, especially if you’re driving along a cliffside. But it can also be the perfect view for the photographer in you. With that said, driving through the mountains puts a unique set of demands on your car. Making tight turns around hairpin bends (and cliffs) necessitates that you have a car with good handling and traction. Climbing hills also means more fuel consumption, making it important to have a vehicle that’s good on gas.

Ideal vehicles for the hills

Here in Canada, the closest thing we have to a desert landscape would be the Alberta Badlands (and believe it or not, the

arctic as it is considered a polar desert). Driving through the desert is a unique experience for many, because it’s so foreign, perhaps something they only see in movies (think Mad Max). However, there are many desert roads in the world and if you ever plan to drive on one of them, you need to have the right kind of vehicle. Desert roads, especially unpaved and uneven routes, can put a strain on any vehicle.

The same goes for snowy landscapes. Unless you’re a researcher, you’ll probably never drive on a full-out arctic roadway, but you may pass along subarctic routes. The treacherous nature of these roads are recognizable – they’re icy, prone to harsh weather (i.e., blizzards, low visibility) and can be quite isolated. That’s why it’s ideal to drive a car that’s built for harsh conditions, one that is durable, sports a powerful engine and ultimately, has a comfortable interior. Essentially, an ideal car for the desert is one that combines the comforts of a standard family or luxury car, with the construction and power of an off-road vehicle.

Ideal vehicles for the desert and arctic

If you’re looking to buy a new (or used) car, it’s important for you to consider the kind of community in which you live, and the type of terrain around you. It’s better to have a car that suits the environment you frequent. After all, it wouldn’t make sense to buy a vehicle meant for summer conditions if you live in a winter wonderland like Alaska or the Yukon Territory. You want your hard-earned cash to go towards a vehicle that is fuel efficient and easy to maintain. By choosing a car that suits your geographic location, you’ll shave off unnecessary costs and hassles that many other drivers have to deal with on a daily basis.