When we think of conspiracy theories, we usually think of The Moon Landing, President Obama’s birth certificate, and the belief that Paul McCartney is no longer alive (yes, it’s a real theory). But auto industry conspiracies tend to stay back in our rearview. It’s strange why this is the case, considering how dark and frightening some of the auto world’s mystery stories really are. Nevertheless, like any of the best conspiracy theories out there, rumours of the car industry’s shady behaviour are intriguing to talk about. In this post, we’ll look at cars and the people behind their development, which were reportedly “silenced”, because they were viewed as threats to the profitability of other industries.

Let’s be honest – one man’s discovery often means another man’s downfall. So the natural (although unethical) course for people whose livelihoods are threatened by new technology or knowledge, is to silence the people who will put them out of business. Apparently, this was the narrative for quite a few people in the auto industry.

Imagine filling your tank with a jug of water, and then driving off to your destination. Sounds awesome doesn’t it? That was 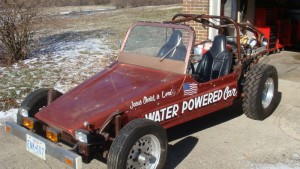 essentially the concept behind Stanley Meyer’s (August 24, 1940 – March 20, 1998) water fuel cell engine. Without getting overly technical, his fuel cell technology was designed to separate water molecules into their main elements, hydrogen and oxygen, which would combust and drive the vehicle’s pistons. According to the science, the energy released is 2.5 times more powerful than regular gas. And because water is the fuel, the only emissions would be harmless water vapor. Mr. Meyer claimed to have built a water-powered vehicle (which took the form of a dune buggy) in 1980.

That right there was Stanley’s creation. Sure, it wouldn’t win any awards in the design department, but it was certainly the beginning of something revolutionary. The water separation process that powered the buggy was influenced by water electrolysis, a procedure which many high schoolers experimented with in science class. Apart from his love for science and mechanics, Meyer chose to focus on his water powered car as a result of the 1975 Arab oil embargo, which led to soaring gas prices. Meyer appeared on Ohio’s WSYX, a T.V. station affiliated with ABC, where he demonstrated the buggy’s abilities. He claimed the vehicle could travel from Los Angeles to New York on just 22 gallons (83 litres) of water.

While most people would hail Meyer as a genius, others saw him as a nuisance. Yes, he received quite a few patents for his technology, but they supposedly came with much harassment. Two investors he had sold dealerships to sued him, resulting in an examination of his buggy and the findings of “...nothing revolutionary about the cell…”. He was even labelled as a fraud, relying on pseudoscience to forward his technology. But here’s where things get dark: On March 1998, Meyer died suddenly after having dinner at a restaurant. His brother claimed that he ran out of the restaurant (where he was meeting with two Belgian investors) yelling, “They poisoned me.” Grove City (city in Ohio) police investigated his death, but coroner reports said that Meyer died of a brain aneurysm. However, his supporters are convinced that he was assassinated to prevent his inventions from potentially destroying the oil industry.

Tesla Motors made electric cars cool for the 21st century. But if you backpedaled a few years, you would hear stories about electric vehicles getting destroyed. Before we proceed, here’s some trivia for you: What year was the first electric car built? We’ll come back to that. However, let’s just say that the concept of battery-operated vehicles have been around for a long, long time. And during its lengthy lifespan on this planet, the electric car was apparently despised by some “industry folk”, who didn’t want to see its success. It may be hard to believe this since the world hails Elon Musk as a genius, but if the urban legends are true, he’d probably be an outcast (and a target) if he were alive during an earlier time. Back in 2006, the documentary “Who Killed the Electric Car” hit theatres after premiering at the Sundance Film Festival. The film, which was narrated by Martin Sheen and featured Tom Hanks and Mel Gibson, highlighted the poor commercialization and destruction of electric vehicles. General Motors’ (GM) EV1 was at the centre of the film’s attention. GM began production for the EV1 back in 1996, making it available only by means of leasing to residents of Los Angeles, California, Phoenix and Tucson, Arizona. Its retail price stood at $34,000, allowing customers to lease the car for $399 to $549. The company decided to build the car due to the favourable reviews of its 1990 Impact electric concept car. A 2-door, 2-seater coupe, the EV1 received positive reception from customers, and was praised for its superior driving experience. But by 2002, GM discontinued the EV1. The odd thing about the cancellation was what followed: all the EV1s on the road were repossessed and crushed. A total of 60 units were donated to museums, educational institutes and facilities overseas. Only one EV1 remained intact, and was given to the Smithsonian institution. GM claimed that the EV1 sat in a niche that just wasn’t profitable enough for the company to benefit. But that explanation doesn’t sit well with many electric car enthusiasts. The documentary highlighted the fact that almost all of the cars were completely destroyed, despite the high satisfaction among its drivers. Again, the conspiracy here, is that the success of the EV1 would have led to an electric vehicle revolution that would threaten the oil industry.

The use of hemp always stirs up a good discussion. Perhaps, it’s due to the number of things it’s used for, such as rope, 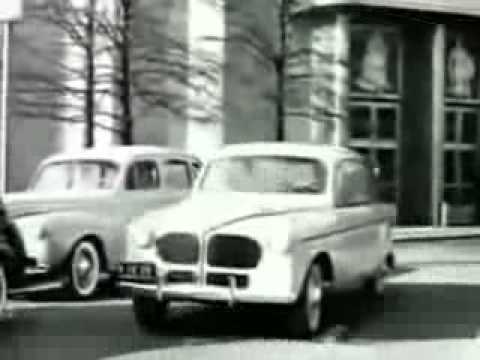 cloth, oil, pulp and paper. And it also gets some attention since it is a member of the Cannabis family (but hemp isn’t meant for “R&R”). So how does it stir up controversy in the auto world? Well, Henry Ford himself had plans to build a plastic car derived from hemp, as well as other biological material such as flax, soybeans and field straw.  The car would run on a gas blend of 85 percent gasoline and 15 percent corn-derived ethanol. It’s the kind of technology that would make environmental cry tears of joy. And while it may seem like a contraption from the future, Mr. Ford revealed this “veggiemobile” back on August 14, 1941. To some, the thought of a car being composed of plant-based material may seem impractical. But it was a genius idea. The total weight of the car would be 1000 pounds. A typical steel car at the time was 2000 pounds, so the use of hemp would lead to a 50% reduction. Even more impressive, were claims of the car’s strength. It has been said that the hemp construction made the car 10X stronger than regular steel cars. Ford clocked in about 12 years of research to produce the vehicle. He hoped to combine the industrial world with agriculture, make cars safer, and deal with a metal shortage taking place at the time. Apparently, the car never went into production due to the outbreak of WWII, which halted the production of automobiles in America. A plan to produce a second vehicle surfaced, but by then, interest in making plastic cars had fallen off completely. Unlike the GM EV1 cars, which still exist at some museums, you won’t find the Ford’s hemp car on display. Eugene Turenne Gregorie, (or E.T. Gregorie), the head of Ford’s design department destroyed the car. Of course, not everyone buys the WWII explanation. A number of people believe the car never made it to production, because of the hemp industry’s potential to outdo the growing timber and textile sectors. Ironically, some manufacturers (such as Lotus) use hemp in the construction of their vehicles.

Giving You Reports, Not the Facts

Keep in mind that the three examples we’ve listed here aren’t necessarily fact or fiction. They just happen to be some of the best conspiracy theories in the car world. Trying to figure out whether these rumours are true or not is messy, because there are too many conflicting reports and claims to go by. For now, voicing opinions is all that can be done when discussing these urban legends. If you want to stir up conversation or write the screenplay for a thriller, then you’ll probably get a kick out of these theories. And if they’ve made you less trusting of the auto industry, take comfort knowing that technology used in those cars are present today.