When a car with botched design hits the scene, everyone thinks they could have done a better job. “What’s up the rear?” they ask. “The grill and lights look terrible!” they say. You’ve probably seen a less-than-stellar car design, though those same thoughts and even told yourself and others you could do a better jump.

And that could be true. But let’s pretend you’re an automotive designer, and have just received the assignment to design a new model for a hot car brand {insert name here}. The pressure is even heavier now considering the artist before you was fired, because of the dismal results of the last model released.

Are you ready for the challenge?

Keep in mind that you need a serious grip (or pencil grip that is) on drawing mechanics. In fact, many of the greatest automotive designers began sketching cars from the time they were in public school, perhaps drawing automobiles at the back of their math textbooks.

You’d better have refined drawing skills, skills so sharp that the execs of a car brand would pick you out from a crowd of designers without second-guessing their decision.

With that said, it’s also important for you to get your mind in gear for what’s ahead. Designing that sleek new ride isn’t a cakewalk, which is funny because everyone thinks an automotive design job looks like this… 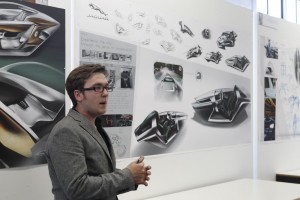 …a blissful, creative environment of rainbows and butterflies. But that’s far from reality.

The process in video

From Zero to Finish - The Car Design Process Exterior Design The process begins with initial sketching - the more artsy side of things. You will sit at a blank canvass, allowing your inner genius and gifted hands to create a portrait of the next hot car design. You’ll feel like a musician plucking guitar strings in hopes of finding that killer riff or a writer spewing a stream of words in an attempt to find the seed of a story. It’s all about emotion here. This is where dreams and talent really shine, and working 9 - 5 (and more) will seem like bliss at this point. The sight of others going home, the sun going down - none of that will faze you.

Next up are the packaging considerations stage of the project. Unfortunately many brilliant ideas don’t make it past the canvass. This is where reality sets in. Engine specs and safety requirements start to “shape” the vehicle, giving rise to design changes that you didn’t anticipate. The purpose of these considerations isn’t to stifle your creativity, but rather, to ensure your design is practical for the car’s performance as well. Therefore, those long hours of inspiration will bring about more perspiration since you’ll have to revise your original drafts. During this stage, you’ll start to see how the objectives of business surpass the hopes of art, and you might start wishing you were painting a landscape instead. Next up is the computer/clay modelling phase. Here, your design (or what’s left of it) leaves the page and goes digital. 3D modelling comes into play so that your collaborators can measure the car’s physical dimensions and thus create more detailed drafts. You’ll feel some satisfaction seeing your design getting a computer treatment, but of course, it won’t look much like what you first envisioned. Afterwards, you will start to see clay models of your “refined” sketch. And considering we’re in the 21st century, you might be lucky enough to see a model of your car design pop out of a 3D printer. The model won’t be full-sized. Again, you’ll likely feel some excitement witnessing the first physical rendering of your idea in front of you.

The final part of the exterior design is full modelling. At this point, your colleagues will add polymers and other materials are often added to the clay model. Now things can get bittersweet here. Right before you will lay a model that looks like the actual finished product. That’s a big deal. However, with all the changes that happened, it will remind you how unlikely it is that your original design will go into production.

The interior design process starts like the exterior did with sketching. If you already sketched the interior already (which is quite likely to happen) it will be used. Of course, the inside work will also have been tweaked by several other designers. Some of your ideas for interior stylings might stay the same, but certain changes will come into play that will make the inside “not look the same”. You’ll get used to it. At least the next segment - the addition of colours and materials - won’t sting too much. Your ideas will finally start to pop in terms of visuals and texture. Various applications of paints, trims, colours, and fabrics will get selected to glaze your car’s vehicle and exterior. Next, your car gets some functionality as your engineering buddies add dashboard and driver control elements. You may see some additional car design changes at this stage. They’re mainly for ergonomic concerns which is a major issue for manufacturers since they influence driver safety. Finally, your car’s materials will get tested and refined to the max. How well will these components withstand extreme heat or cold? How will they withstand heavy rain and snow? How will the car perform after wear-and-tear starts from driver overuse? All of these questions will get answered in the factory, where robots will carry out the tests to find the answers. Despite this almost finished product not being your original design, you may still hope that it does well. In vein of everything said so far, you could luck out and see your design come to fruition. If so, engineers will make adjustments to get your design into production asap and reduce the costs. Other things get added here as well such as spec sheets to make sure that your vehicle is consumer-friendly. Of course, we’d tell you to get the champagne bottles ready to pop if you became a success.

You’ve spent hours slumped in your chair perhaps until the evening foregoing the gym or evenings watching the big game courtside with your friends. You’ve done all of this with the dream of seeing your design come to life. And guess what? It still hasn’t been chosen yet! Even if your idea has survived to this point it may never hit the roads, now that management and marketing have to share seats at the boardroom the gavel has to knock. What we didn’t mention earlier is that several ideas from other designers, both in-house and freelance, are getting considered as well (how’s that for a plot twist?) This explains the issue with concept cars that never hit the market. It’s like the tragic story of an athlete who almost made it to the big leagues but had to give up because of a career-sabotaging injury. Well, as a designer this could very well happen to you.

During this phase, mixups of all kind occur. Designs often get botched when execs and designers don’t see eye to eye. Both parties are brilliant at what they do, but have different focuses in mind. Each side tries to compromise, and what you get is a mishmash of ideas that just don’t work too well.

From First Draft to Launch Day - How Long Does this Take?

With all that’s been said, you’re probably wondering how long it will take too see your work of art turn into reality. At some point, your work has to go somewhere, right? Well, let’s just say that it’s not a sprint and it’s an art meant only for those who have patience. Take a deep breath: it requires anywhere from 3 - 5 years for a car to go from sketch to finished product. Keep in mind too, that it can be longer and filled with ebbs and flows that will make the weak at heart bow out.

Like any other creation, it takes a lot of hard work, skill and patience to see a car design go from start to finish. It’s not for the weak-willed. More importantly, it’s not a profession for those who have thin skin since your beautiful design may easily succumb to changes or another design altogether. And there’s a likelihood of conflicts of interest twisting and contorting an otherwise good design into something unappealing. So next time you see a botched design hit the press, say  “at least they tried”.