How to Keep Your Cool When Cyclists Hog the Road 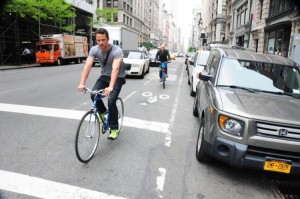 You’re cruising along a crowded downtown street – let’s say Yonge Street – and there’s traffic to your left, and a line of parked cars to your right. After a series of stop-and-go moments, traffic is flowing a bit better. You pass a stretch of road where you see no parked cars on your right side, and cyclists who seem bent on keeping up with you. The cars ahead of you slow down and you do too. Further up, that empty stretch of road comes to an end as their cars parked on the right again. Since you’ve decelerated, the cyclist manages to pass you. And then, in an effort to avoid hitting the parked car, he swerves in front of you without signalling. You floor the brake, honk the horn, and tell him off. He just slips through the space of slow moving traffic and parked cars without looking back.

Scenarios like these lead to drivers expressing their hate for cyclists when chatting with friends. Forget the salty diet or lack of exercise – constant run-ins with cyclists and the road rage they cause will spike the numbers on your doctor’s blood pressure monitor! For that reason alone, it’s worth understanding why you get upset and how to drive safe with the presence of cyclists on the road.

The first trick to stop the jaw-clenching reaction triggered by disrespectful cyclists is to understand your psychology. You don’t need to see a therapist for this. However, they have offered some reasons why drivers get mad at bike riders with whom they’ve had close calls with. Tom Stafford, although not a therapist – he is an evolutionary psychologist – has offered his theory on why cyclists upset drivers.

According to Stafford, our anger towards cyclists has little to do with them at all. Rather, it comes from a personal feeling that a “moral order” has been violated. Cyclists operate much smaller vehicles than drivers do, and they may seem to get away with breaking rules that motorists in cars can’t. And it’s here that Stafford’s argument comes into play.

“…Deep within the human psyche, fostered there because it helps us coordinate with strangers and so build the global society that is a hallmark of our species, is an anger at people who break the rules, who take the benefits without contributing to the cost. And cyclists trigger this anger when they use the roads but don’t follow the same rules as cars.”

Essentially, Stafford is saying that we get mad at the sight of motorists (in this case, cyclists), because they are breaking rules that society has agreed that we all must follow. So when a cyclist cuts you off or makes a turn without signalling, you’re getting mad at a violation of the rules, not the rider themselves. But this principle applies to anyone. If a bus driver swerved into your lane without signalling, or if another car ignored your “right of way”, you’d most likely honk at them out of frustration.

Therefore, recognize that any motorist can break a rule, not just cyclists. You will encounter the occasional cyclist who is utterly careless, but you’re far more likely to have a close call with a driver of a car. So if you’re going to get upset with cyclists, you might as well hate everyone else on the road.

Another way in which you can gain some perspective, is to try cycling from point A to B, even if it’s just for a day. And we’re not talking about on the sidewalks (that’s illegal). Riding beside traffic, with cars, vans, buses and other large vehicles, will humble just about anyone who thinks lowly of cyclists. The intimidating size and noise of bigger vehicles alone will do it.

You’ll quickly realize that it takes just as much effort to ride and stay aware of your surroundings as it would in your car. To complicate the trip, you have to watch out for people opening doors without looking out for you, drivers who get too close to you, and those who completely disregard your hand signals. Again, you’ll see that cyclists aren’t the only ones that have their share of faults – drivers think they own the road too.

It’s for these reasons that so many people opt not to ride bikes in urban areas. And with those tragic reports of cycling fatalities, respect should be given to those who obey the law while risking their safety on their bikes. Now that isn’t to say bike riders are free of responsibilities. If you ever decide to roam the streets on your bike, you are still obliged to follow the rules, whether that means stopping at traffic lights/signs or signalling at turns. But just remember, that you will encounter some careless drivers too.

One of the reasons why drivers hate cyclists too, stems from their failing to remember driving rules. We’re not talking about traffic regulations, but rather, how to drive safe in the presence of cyclists riding nearby. In fact, several drivers who have close calls with cyclists are actually pulling off risky moves, assuming that the person on the bike is in the wrong. But the person in the car may need to check themselves. Can you name some rules to drive safely in the presence of bicycles? If not, then it’s time to revisit the driver’s handbook (specifically, Ontario’s). 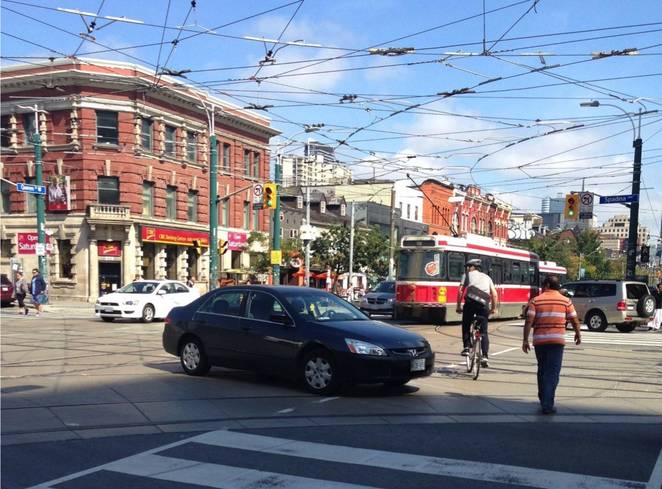 Pedal to Pedal: Are the Cyclists or the Driver's Right?

This silent war raging on between drivers and cyclists has persisted for years. It’s not as newsworthy as the war between Uber drivers and traditional taxi drivers, or Donald Trump’s stream-of-consciousness episodes at the U.S. presidential campaign, though a tragic accident involving a bike and car would make the headlines. But there’s still a battle going on since drivers and cyclists often blame each other for their miserable encounters with one another. With that said, where do you stand? Do you think that cyclists are usually the ones to ignore road rules? Or do you believe that some drivers completely disregard cyclists? For those of you who you have cyclophobia, there are few things to keep in mind before calling cyclists scum of the road.

What Drivers Say About Cyclists

To say there are no careless, aggressive and idiotic cyclists out there is a sickening lie. There are. You’ll even get a few who cut drivers off, and then curse or flip the bird at the folks in the cars! But they only account for a small number of bike riders. Drivers often verbalize their frustrations towards cyclists, pointing out why they think those on bikes are the cause of close calls and accidents. However, a WIRED article written by Bryan Derballa back in November 2014 raised some good points about why it’s unreasonable to do so.

Derballa’s article highlighted some other arguments made by drivers against their cycling counterparts. They too, don’t really hold up against the rebuttals written in the piece. Although cyclists can annoy drivers at time with their antics, you have to remember that they’re motorists as well. Above all, you were taught how to drive with them as a student. So learn how to cooperate!

It can be nerve-wracking trying to drive safe when cyclists are nearby. But understand too, that cyclists are trying to ride safely as well, and they too are nervous around cars (and other big vehicles). Naturally, misunderstandings and mistakes happen, from both drivers and cyclists. Just as there are errors, there are careless people as well, from those in cars and on bikes. You may dislike cyclists, but understand that they are not new to the roads. They’ve been around for centuries, sharing space with animals along with cars and carriages. And who knows - when driverless cars hit the roads, which will reduce the need for cars, there’ll be more cyclists out there. In fact, you might just be one them.