It’s True: The Back to the Future Car is Coming to the Present

The next best vehicle to look out for is the Back to the Future car. It was just a little over 30 years ago, that the DeLorean DMC-12 was built and subsequently, appeared in the hit classic, Back to the Future, which established itself as a cultural heavyweight. While the franchise entertained audiences with its ensemble cast, raking in over $975 million dollars, and winning numerous awards and praise, it was the DeLorean that carried the movie’s legacy. Sure, the car was around before Back to the Future. But it was its appearance as a time-travelling sports car in a hilarious sci-fi movie series that made the vehicle iconic. And for those of you who never got to drive or see one in person – perhaps you were too young or are currently too young to remember it – you’ll get a chance to see it again.

Available only from 1981 – 1983, the DeLorean DMC-12 of the 1980s was largely looked at as a dud. It wasn’t the worst car on Earth, but it certainly wasn’t the “it” vehicle back then. It was supposed to accomplish many things – the car would be compact, sporty, and affordable – which its maker, John Z. DeLorean, dreamt up. But apart from its gullwing doors and stainless steel body, the coupe felt underwhelming. It sported a kitten-like 2.8 litre engine, which only produced a mere 130 horsepower, going from 0 – 60 in a lumbering span of 15 seconds. Additionally, there were other issues, such as the doors getting stuck, and it just didn’t deliver what it could have for its high price. It’s fair to say that Back to the Future car is what saved the DeLorean’s image, much like what Breaking Bad did for the Pontiac Aztec (Walter White made it popular among millennials).

Product for the new DeLorean will resume at the end of the year. A new bill that allows companies to build small quantities of replicas, made it possible for the DeLorean Motor Co. to start reproducing the DMC-12.  As it stands, no one knows all the specs of the updated version, although there is speculation about the car’s engine; it will most likely offer somewhere between 350 – 400 horsepower. The company also says it will update the interior (we’d hope so) with new technology, while retaining the same boxy design from the original DMC-12, created by Italian designer, Giorgetto Giugiaro. And if you’re looking to pick one up, keep note of the price tag too – it will start at just under $100,000.

A Look at the Numbers

Apart from the price, it’s worth looking at some other numbers concerning the DeLorean. Just over 9,000 were produced, with only 6,500 of those units still in existence. So there are still quite a lot of the 1980 models out there. With that said, it’s hard to say in what condition their owners kept them in. The future of the DeLorean, however, won’t see so many “offspring”. The legislation that allows the company to produce the replica vehicles limits the production total to 325 cars per year for five years; that adds up to 1,625 DeLoreans. What happens after that is dark territory. 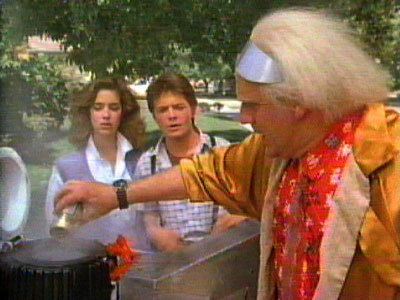 The premise and plot of Back to the Future might be a bit hazy for some of you. And we won’t ruin the movie for those of you who didn’t see it, but the premise is this: High-schooler Marty McFly (played by Michael J. Fox) and scientist Dr. Emmett L. Brown (played by Christopher Lloyd), travel through time in a DeLorean throughout different periods of history for various reasons – you’ll have to watch them if you haven’t seen or can’t remember why they travel through time. The one thing we can spoil for you, is that it’s full of fun and laughs.

After reading this story, you might wonder why the DeLorean Motor Co. is putting their stock into a car that died out 30 years ago. Considering it was technically a “failure”, it’s understandable to think this way. However, as we mentioned earlier, there’s the example of the Breaking Bad and the Pontiac Aztec. Again, we won’t spoil anything for those of you haven’t seen the series, but we can tell you this: that Breaking Bad was the best thing to happen to the Aztec.

Young people ages 18 – 34 started buying the Aztec by the droves after the crime drama made its debut on AMC. And it’s startling to see since the Aztec was named as one of the ugliest cars of all time. Either viewers got a contact high from watching the show, or Walter White (the show’s main character) is so “rad” that you’d drive what he drives.

And that illustrates the point of DeLorean’s move. Pop culture has the power to make products, services, ideas and events interesting (or hated). For example, those of you living in the GTA, might now hear others refer to Toronto as “The Six”, all thanks to rapper, Drake, who often uses the term in his music (namely on his 2015 mixtape, “If You’re Reading This It’s Too Late” or IYRTITL for short). Likewise, the long-lasting legacy of Back to the Future has led to a following of people who still have a nostalgic appreciation for the franchise.

A revamped version of the fictional car they love will certainly get their interest. And who knows – the production of a new “Back to the Future car” might be a promotion for a new installment in the franchise (let’s keep our fingers crossed).

You may have no intention of driving a DeLorean next year, but still be on the lookout for one. It’s an iconic symbol of both 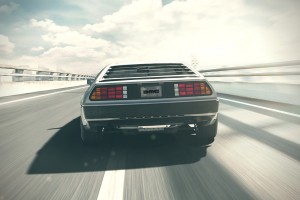 the automotive world and pop culture. It’s kind of like seeing “Duff” beer from the Simpsons hitting the shelves at LCBO or The Beer Store (wouldn’t you drink that?) – it’s nostalgia finding its place in present and future. And aside from the occasional game collection or theme-party, how often does the “old school” come back so strong? Almost never.